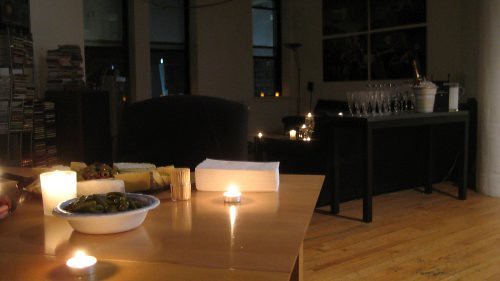 I did alotta living last Friday night after work.

Event 1
I went to another office party - I think maybe my fifth? It's one of the perks of being a consultant. The usual: food, handshakes and drinks.

Event 2
Met up with Hazel for a drink on the UWS where I ran into a woman, Cia, I just met earlier on in the week. I also chatted up two British girlies but I was beat and hopped home at midnight.

Event 3
At 1AM, I was still up so Cain and I decided to grab a drink in our local bar. So out I went again. There I ran into Cia for the third time. My hood is tiny.

Event 4
As soon as I got home at 2AM, Gio rang me. He got his Xmas bonus and wanted to hit the town. "Dude, I'm beat, I just went to...," I started when he interrupted, "I got a car, a wad of cash, and you never turn down an invitation."

Soon, I'm hurtling down the West Side Highway and grab superstar parking outside an underground club. There I got shut down for the second time since I became single. The last time it happened the same way, "You're a talker, go talk to her." I swear, fastest way to get self-conscious. Twice in 18 months is not bad but still - Totally. Shut. Down.

Event 5
But Gio's hungry and I'm a pig. So we grabbed the whip and hit up Blue Ribbon for a late night seafood dinner. I accidentally ate all the lobster. I was amused. Gio, not so much. We sat next to this gorgeous twenty-something blond and her older French date. Gio and I chatted with her a lot, something French dude wasn't happy about.

He kept trying to hold her hand and I wanted say, "Dude, dude, dude, please...have some pride. She's a fetus."

Just as we were getting up to go, she engaged us in conversation again so we sat down and chatted with her a bit more. I contemplated slipping her my card but I reconsidered. Gio told me I shoulda. Eh...

I woke up four hours later on his couch, stretched and went home. Stepping outside I thought, My friends rock so hard, before I slipped underground.

Music: Heartbreak, cigarettes and songs, with a winter's chafe
www.loganlo.com