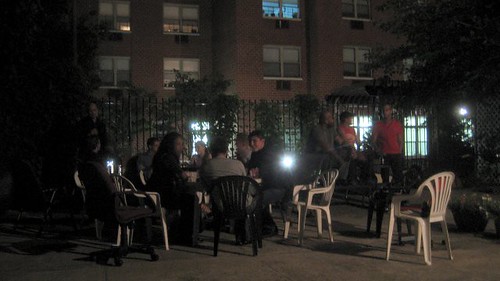 Summer's not my season. Bad, bad, bad things happen to me in summer.

Fall, however, is my season. I woke up all week thinking it's fall.

I woke up happy all week.

I've been hanging with these guys Paul and Sheridan a lot lately. Recently, Paul and I were at party with an old friend/legal client of mine and a group of us got talking.

Girl1: What do you mean?
Me: There's no such thing as a line. Look, if you're attracted to me, I could walk up to you, say anything, anything, and you'd respond positively. In college, my friend Crawford would walk up to a girl, go Whoo-Hooo! and ten minutes later they're making out.
Girl2: I disagree, what a guy says matters.
Me: To an extent, yes. But I think it's less about the content and more the conveyance. Say a cute chick walked up to me and started talking to me in French with a wink'n smile; the content, which I wouldn't understand, wouldn't matter to me. I'd just be thinking, Hey...
Girl1: That's cause you're a guy.
Me: No. (sighing) It's cause I know.
When you like someone, they can do no wrong; when you don't, they can do no right.
- Somena (mentioned you twice in a week!)
Music: the good boys and girls take the so called right track
www.loganlo.com