New York in the Indigo 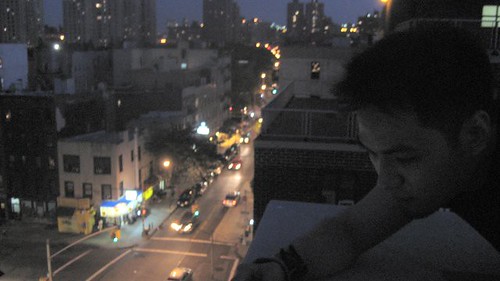 I've been sitting here working all damn day. At least it's the weekend. Hazel took this picture a couple of weekends back at the 7/7/07 rooftop party. Time's just sprinting by.

People email me asking why Hazel, Somena, or any of my other female friends and I don't just get together.

It's because When Harry Met Sally isn't the real world the NY I know. In my NY, guys can have three types of female friends: former somethings, just friends, and potential somethings.

In my life at least, we all know the parts we play.

A guy like me won't end up with a chick just cause she's around. And vice versa.

Who wants that? That's like when you eat the crap in the fridge because you're too lazy to go out so you think, Eh, it looks ok.

I've had crazy love before. Once you've had that, everything else is a distant second. If you've ever been loved, you know. You won't take less.

Dean Martin knew that you can never really go home to Steubenville after you've seen the lights of New York.

But I'm not lonely.

Music: It ain't no big thing But I know what I like
www.loganlo.com