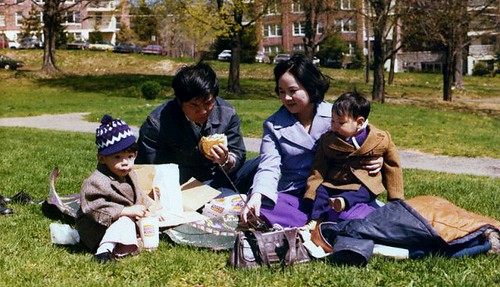 I couldn't celebrate father's day because of the wedding. I saw him though.

But, when he was younger than I am now, he came here to wash dishes and chop fish to feed his family. He didn't want us growing up there.

I realize now how hard it must have been to be 4,000 miles from home, not know the language and work at jobs far beneath you.

I can barely make it outta the Upper West Side.

He said my mom cried when he came home stinking of fish guts for the first time. She was the local beauty queen; he was now a fish monger.

I thought I married a lawyer, she said.
You once believed in me enough to marry me, he said, just wait.
She did and he became the man he knew he could be.

He says that he believed in himself even if no one else did.

He says that he believes in me. I'm actually a bit surprised he's still pulling for me.

At least you're not gutting fish; you're already doing better than I was.

He doesn't know about this blog (don't tell him). But I wanna say, Thanks anyway.

Music: daddy's rich And your ma is so good-looking
www.loganlo.com