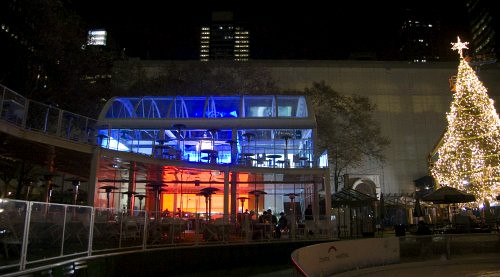 Tell myself that I write in a mix of hardboiled and Economist but with a lotta slice-a-life descriptions a la A Tree Grows in Brooklyn.

Yes, it's a girl's book but it's also a book about NYC and the people in it. Some of the clearest pictures of my city are between those lines. One Xmas scene stays in my mind - in it, a tree butcher has a contest to give away the trees he can't sell: if you can catch a tree without falling, it's yours. When he prepares to throw his nicest tree, a small, poor girl and her little brother ask for the chance to catch it.

It's a God-damned, rotten, lousy world, he thinks when he sees them.

Wish I were a better writer to say what I wanna say sometimes. It's like the difference between seeing the Grand Canyon and seeing a postcard of the Grand Canyon. But lemme try anyway:

The good things pull you through the dark times. Heartgirl and a Friseur Frau sent me Xmas cards and my brother sent me another postcard of the California sun. They're all on my refrigerator door.

Guess sometimes, a postcard of the Grand Canyon's enough to get you through. It's the little things that pull y'through, yeah?

So, regardless of your religion, faith, or background, lemme give you a little wish in my really simple, ineloquent, Queens, NY manner; it's a post card of what I'd say if I were a better writer and not the Oprah-ish writer a friend thinks I am:

PS - for those of you that asked, here's a pic of me with a beard, courtesy of Nadya R. Happy Christmas.

Music: a cold winter's night that was so deep
YASYCTAI: Do something nice today for someone just cause... (10 mins/1 pt)
www.loganlo.com