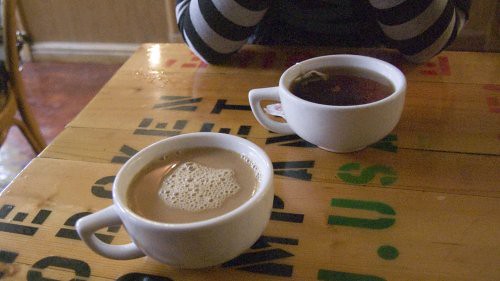 Her: I can't believe that you've got a girlfriend. (slaps me lightly across the face three times)
Me: (rubbing face) I'm as surprised as you are.
My roomie had an attractive and cool friend stay over during the summer and we got along well. She showed up recently to stay for another week and she opened with the above conversation. We both laughed before she gave me hug hello.

Seriously, though, the ebb and flow of my life does still surprise me. It's always nice when the surprise isn't a nasty one.

Him: Canal Street, please?
Me: Sind Sie Deutsche?
Him: (surprised) Ja.
Friday, crashed a party in Chinatown. Maybe cause I got a face that says, I know where places are - though I don't - or a face that says, Ask me, I probably speak English. Regardless, on the way there, three groups of people asked me directions. Last, was a group of German tourists. Per their reaction, answering them in German was akin to my sprouting wings and flying.

Get sucha kick outta that; I imagine them recounting the story when they return - And then in Chinatown, in America, we asked this Chinese guy how to get to Canal Street and he answered us in German! (it was crappy German but still!)

Party was interesting. Since I'm tired of The Standard, and there was a whiteboard, made a buncha girls tell me what they did for a living a la Pictionary. They had no rum so PB and I killed the scotch.

A buddy got a text from his pseudo-girlfriend and he beamed so much that the girl he was chatting to started to cry! Turns out, the girl just got outta a bad relationship and wished that her guy would be as jazzed to get a text from her as my buddy was from his girlie.

So I pointed at the exit and said, You never know what's coming through those doors. You can never change how people think, only yourself. So why put yourself through that?

Dunno if she believed it but it's true - it's all heartache or paper cuts; either way, it's nonea your business.

Sunday, had a quickie brunch with Heartgirl by the water. We both agree that 2008 sucked hard for each us.

However, we also agree that 2009 looks promising.