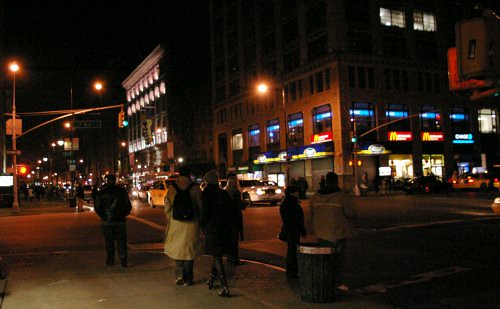 Was at a random restaurant where I ran outta the restaurant to say hello to a co-worker from a former life as he walked by. He married a girl that also worked with me. We traded numbers and he left. Ten minutes later, I saw the wife and waved at her. She didn't recognize me but smiled and waved back.

Heartgirl: That's nice of her - to wave at someone that she doesn't think she knows.
The Professor and Johnny aren't around so, after Thanksgiving, stop by Danny the Good's house.

Him: Can you fix my computer for me? I think it's the harddrive.
Me: (reaching into coat pocket) Oh, happen to have a harddrive on me. (pulling out harddrive)
His wife: (laughing uncontrollably) Only you would harddrive in your jacket, Logan.
Just happened to be cleaning out my desk in my office and stuffed it into my my jacket pocket before I went to see them. They think I'm brilliant. Or insane. Not sure.

For the first time in a year and a half, slept for three days in a row. That's a lot for a guy like me. Also had a lot of interesting conversations.

Me: (on phone) How do you not know this? First is kissing, second is under clothing, third is neck up, home is...home.
Him: What're you talking about? Second is over, third is under.
Me: Maybe where you're from, here in NYC, over and under're both second.
Him: I AM from NYC. (pause) I think our only contention here's third.
Me: It's quite a contention! (hearing clicking) Are you googling this?
Him: No. (long pause) Maybe...
Yes, we're that geeky.

Music: something is bound to give there's hope for the hopeless
YASYCTAI: Wave at someone and see what they do. (1 min/1 pt)
www.loganlo.com