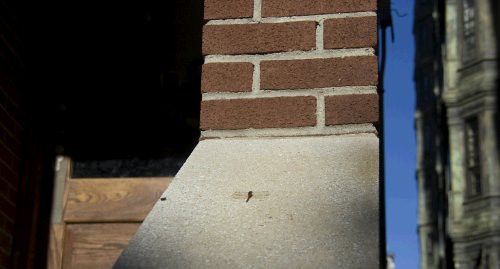 Was walking home over the chilly weekend when a dragonfly settled down on a stoop in my neighborhood. Guess I'm not the only one that thinks NYC's lovely in the Fall.

Saw Heartgirl over the weekend. She made an offhand comment about something, which I don't remember in the least - cause she called me her boyfriend.

Been called someone's boyfriend three times in the past 2.5 years. And the previous two times freaked me out. Decidedly. This time though, it was quite nice. More than nice. It was whatever's the opposite of freaked out.

She hates, hates, hates, that I referred to myself as a womanizer but I told her that it was what I was and not what I am. Just cause she asked, though, I'm going to try and stop using the term completely. Before I do, however, gotta mention that Rain had two of his students interview me recently as a "pick-up artist" - which I never was.

Her: What's the difference?
Me: A pickup artist is talented at the pickup. A specialist if you will. I'm only ok at it. But I'm good at people. And I choose to concentrate on women. Hence, womanizer.
As an aside, both interviewers told me that they expected someone completely different. I like to keep people on their toes.

In other news, PCD and I chatted online recently. She too said it's ok for me to write of her again.

Me: So what's new on the dating front?
Her: I went out with three boys and have seven more. I can't handle any more traffic. A friend and I want to start a blog on dating - now that you're boring. I just need a fake name.
Me: Hey! (pause) What about PCD?
Her: That's a dumb name.
Went home to find a jar for the dragonfly cause I didn't want it to die in the cold. When I got back it was gone. Things're always made of sterner stuff than you expect, yeah?

Music: red letter year they didn't mention how much s__ was gonna change
YASYCTAI: Write a nice email to someone for no particular reason (10 mins/1 pt)
www.loganlo.com