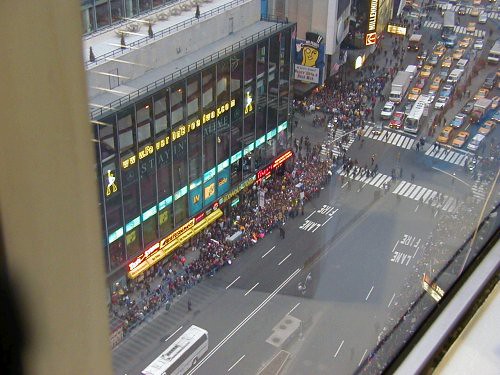 Saw Gio tonight off Times Square. It was a networking thingy and they had some good rum. Probably not a good idea since I went fencing afterward.

The weird thing is that it was across the street from my old pad. Hadn't been there in a while. Ayn Rand wrote of NYC in The Fountainhead:

I would give the greatest sunset in the world for one sight of New York's skyline....When I see the city from my window - no, I don't feel how small I am - but I feel that if a war came to threaten this, I would throw myself into space, over the city, and protect these buildings with my body.

Y'know when you love someone, you'd end anyone that'd do them harm? It's like that.

Wish I could put it in my pocket and pull it out to show you Nino's where I had the best Penne with Vodka Sauce, or the Algonquin Hotel where I'd wish I had dough or the chops to sit at the Vicious Circle, or my corner on 46th and 6th Avenue, where I'd sneak a cigarette at 3AM when I couldn't sleep and wait for the sun to come up. Or my office at 1500 Broadway where I'd look out and see TRL being recorded with those freakin kids screaming.

OK, that I got a picture of.

Feel so damn nostalgic. Wanted to talk to Heartgirl about it but she was busy. S'ok, I'm hoping we have plenty of time to talk about these kinda things.

Speaking of Heartgirl, she doesn't wanna show up here. So I won't write of her anymore. Maybe she'll change her mind but don't think so. Cause she thinks that this is a blog about me being a womanizer - but that's just the marketing message.

Me: It's not. (pause) The truth is, it's the story of a boy like me looking for a girlie like you. (thinking) And hoping, I mean really, really hoping, that this time, it'll be different.
Music: I wish I knew the time that I've taken I pray is not wasted
YASYCTAI: Post a picture of your neighborhood for me (5 mins/1 pt)
www.loganlo.com