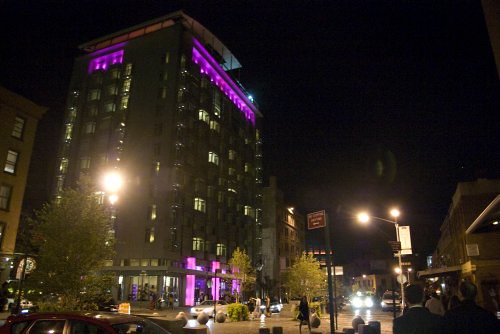 Woke up at an ungodly hour to drive all over the city. Still didn't finish what I had to finish. Also went to the dentist today for the first time in four years. Two dentists in 11 years - no cavities.

Her: I am curious as to why two of your teeth on your left side are cracked.
Me: Mstpoplererihndedsowen...
Her: I'm sorry, what?
Me: (taking tube outta mouth) Most people are right handed. So when I get punched in the face, I get banged up on my left side.
Her: Does that happen often?
Me: More than y'might imagine.
Got into a very perplexing conversation with Heartgirl today so I'm distracted yet again. It's onea those things that I need to figure out myself before I write about it.

Breaking with tradition for the second time, HEI has a blog. So readers, please meet: JBell.

She came by for dinner the other night to borrow Syd. We chatted over some rum. It's nice when people stick around your Venn Diagrams no matter how screwy y'are. You can read her take on me if you can figure out which one's me.

On that note, someone's wondered if I'm nicer in this blog than I am in real life, so in addition to Jbell, the girlie from Sunday said she'd write her view of what happened in my last entry - she said she wrote it in my style (yes, she knows about this blog, no I didn't meet her from it). I never considered that I have a style, but I digress:

Me (the girlie): Are you alright?
Him (Logan): I'm always alright.
He did his fake smile with all the teeth, but the saddest eyes I've ever seen. He's not always alright.
And then the thing happened with George. I didn't scream because screams are not words.
Him: (on phone) Pick him up! Put him back in!
Me: You pick him up! I don't want to touch him! Pick him up!
Him: (scooping up George in a paper towel) He's dead! Do you think he's dead?! I think he's dead!
Me: Put him back in! Put him back in anyway!
Then George swam, in a perfect zigzag, to the bottom of the tank. He must have been caught in a current because that was it -- he was just there, on his side on the rocks. But we didn't take him out. The empty tank would be too sad. Logan says there's one more George in there, he just hasn't seen him for a while. I'm not so sure. So we left this George in, just in case.

Logan told me some sad stories, but they're his to tell. I have my own.

The sleeping pills he takes scare me. But so do his sad eyes. He looks like a little boy. His shirt's too big, and his hair's sticking up all over. He's not the womanizer he pretends to be. He's a lightweight when it comes to his rum. He deserves to be happy.
And suicidal George's swimming around like a miracle fish. He's a little banged up on one side, but I think he's ok for now.
YASYCTAI (hers): Convince Logan that covering the fish tank is worth losing the automatic feeder.
Music: I am likely to miss the main event If I stop
YASYCTAI: Get your teeth cleaned. I wanna make out with someone if only cause my teeth feel amazing. (60 mins/2 pts)
www.loganlo.com