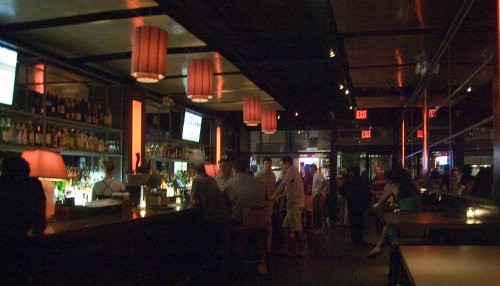 Her: My one problem is that I like boys with brown eyes but I want kids with blue eyes.
Me: Not up to date on Mendel but I'm thinking that won't happen with a guy like me.
Thursday, meet up with WM and chat with Stephen, the bartender. His recipes for drinks are on Fine Living here.

Friday, see PCD - it's nastier than summer'n hell so we stay in and rent In Bruges - not good. So we stop it and see Dr. Horrible online instead - so good! Make cole slaw and almost bogart the whole thing myself.
Her: Well, we're both busy. I mean we're seeing 700 other people.
Me: FIVE! I'm seeing five other people.
Her: (rolling eyes) I meant the two of us together are seeing 700 other people...
Saturday afternoon, go to the gym and get rocked. Take 16 tabs of ibuprofen, shower and dash down to see Heartgirl for dinner on the west side. We get into a tiff because she misunderstands me - don't wanna complicate things for her; her life's complicated enough.

Me: People have done that to me. Hung around with me, telling me that we'll be friends when actually they're just hoping that I'll change my mind and like them in the way they want. It's terrible. (pause) I won't do that to you.
Her: (nodding) Yeah. (later) Don't you dare put what we talked about in your blog, Logan.
Me: (stopping) What?!
Her: (turns and walks away) I hear things.
Me: (muttering) I've gotta change my name.
Walk her to her subway stop and then check my phone. 1AM. Early yet. Walk over to Maru and see old friends. It's 3AM when I stumble home.

Sunday, am supposed to see Pretty Jenny but I screw up the times. Instead see family for an early dinner around the way. Heading home, run into a waitress I know who grabs my arm and pulls me in. The triathlon just ended and she's in a good mood so she buys me a Bud.

Chit-chat before dashing off to church. The hazy heat pulls me into a hazy headspace and I daydream of conversations from the weekend before I snap back to reality. I'm ever between the lines.

Strolling home, a pretty lady sits on my stoop. She stands, smiles and waves at me. I laugh and invite her in.

Music: Too late, two choices to stay or to leave
www.loganlo.com