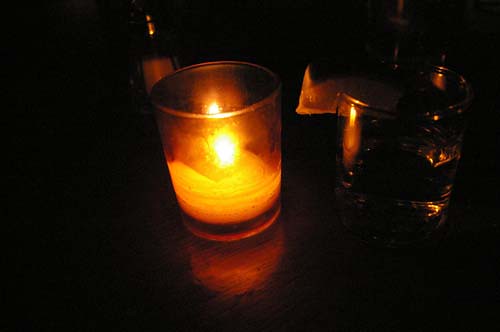 Hope Derek's ok. If I had win to spare, I'd send him some.

Me: Sit on this side.
Her: (shaking head) No, that's what they do in Portugal and I don't like that.
Me: (rolling eyes) It'll just mean that I've gotta lean across the table to kiss you. And I'm terribly clumsy. I mean, I'll still do it and you'll like it. I'm just saying, we're taking a risk.
Her: (laughs) You're a weirdo.
Have dinner at the Maritime Hotel on Wednesday with Heartgirl and drinks round the meatpacking district. We're supposed to go to Kanvas but it shut down. Of course.

Also seeing her Saturday, which is a big deal cause: (a) Fridays and Saturdays are for your friends and significant others and (b) she's still not over her ex. And yet...Saturday night. I'm stupid like that.

It's hard coordinating schedules - I'm always busy when they're free or vice versa. Haven't seen CakeDecorator, Blue-Eyed Girl or anyone else in a week.

Scored a Classic Room at the Borgata tomorrow but no girlie I'm seeing has made it to that, Hey, let's spend a night at a five star hotel together, level so I just gave the room away. Even though no throwing down would be involved, I highly doubt that any of the women I'm seeing'd believe me if I told them that.

Not sure I believe me, come to think of it. I'm still a dude after all. Although, it's been so long that I'm fairly certain I've forgotten how.

Slot A, Tab B - that's how it goes, right? Somethin like that.

Music: Honestly what will become of me
www.loganlo.com