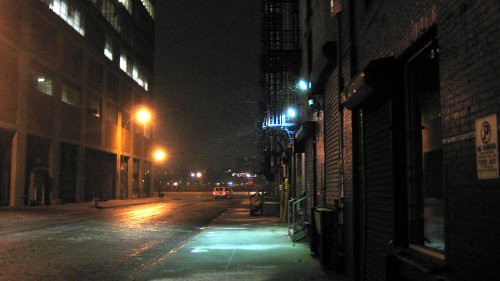 I'm on the wrong side of 6AM when I stick my key in my door and turn to unlock it. I'm wondering what happened this weekend.

Half-an-hour earlier, I'm walking alone in the snow to the West Side Highway to catch a cab home.

An hour earlier, I'm in Guest House with Gio and Paul both gaming the same hottie. Drama. I'm too old for drama. As usual Gio floated us in and gets us a table with a bottle of vodka. Not my poison but it's comped so I take it. I chat up a group of lovely Irish actresses and girl from Kentucky that's a great dancer.

Two hours earlier, I'm in Sway being told by a girlie from Holland that I should meet her again in the hidden club at the Village. Nah.

Four hours earlier, I'm with "Clara" celebrating her birthday at Sugar. I tell her to text all my friends: Logan's all up in my grill - where are you guys? thinking they'll come save her. Nope.

Six hours earlier, I run into an old ghost from my club days. I tell him I'm a Christian and don't run hustle or sweatboxes any more. I don't think he believed me. He woulda never have believed I got grifted.

Seven hours earlier, I'm speaking crappy German and Chinese to Benlbr at The Back Room where John McEnroe slipped past me. Ben and I are on our own tight schedules but it's good to meet up.

Eight hours earlier, I'm stepping into Bar 151 with Paul to see Kung, the Grey-Eyed Girl and Randi. Two girls smile at me but I demur to saying hello. I'm on a schedule.

I'm on the wrong side of 9PM when I stick my key in my door and turn to lock it. I'm wondering what'll happen this weekend.

Music: Searching for something to say; Waiting for the break of day
www.loganlo.com