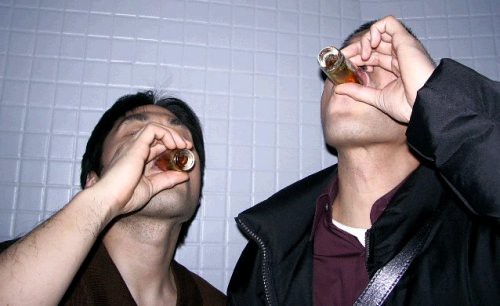 I met Cap in HS at a party in, of all places, a Jewish synagogue. One of us bummed a cig from the other. Don't remember. We were both going to Cornell. He'd look me up, he said.

We kept running into each other - even once at Broadway & 8th over a weekend - but were never really close. While he became a BMOC, I was hustling in the City most weekends.

But, causa some drama, Junior year I was living outta my whip when I ran into him again. He said I could crash with him and his crew for whatever I could spare - I think I paid about $150 a month.

My clearest memory from all of college is of this one absolute crap night. I remember sitting in the kitchen hating when Cap walked in. Like me, he was always up causa this or that.

The worst part, I said, my CD player broke. How's that for a kick in the head? He thought for a bit, walked into his room, and came out with his old CD player. He handed it to me and said had another one.

Here's the thing; he and I were just about the two poorest kids in the house. This is when they cost as much as an Ipod. It meant more than you can imagine. More than I'm capable of writing. I'm just not that good. 14+ years later, I still remember what CD was in it.

Speaking of 14, Cappy eloped with his chick of 14 years. Yeah, you read right. I heard the news today. I'd wish them luck if I thought they needed it.

Ah, just as well - my luck's not the kind people want anyway.

Music: Who's gonna come around When you break?
www.loganlo.com