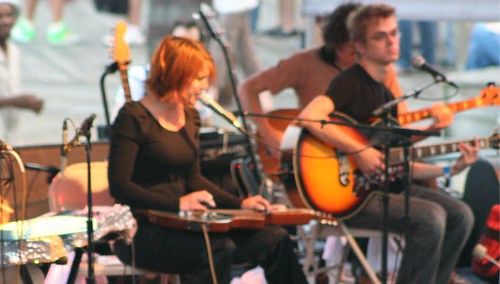 Hopping on a 6AM train bound for Baltimore tomorrow. Exam.

Having some work drama which some of you know about. No joy.

I went to that concert Friday at the seaport to see Camera Obscura (pic). Opening act was The Last Town Chorus - that's a pic of the lead singer, sorry so blurry, I was hella far away. They sang Bowie's Modern Love.

I told the grey-eyed girl I went with that I spent prom night at the seaport. She got a kick outta that. Been in this @#$! town too long.

Speaking of towns, looks like she and I are heading for Friendsville - weird, it's usually me driving there. Well, it happens.

I've been on 20 dates with 14 girlies in 60 days. Plus I met two separate women on the way to the concert. Not sure I'm cut out for this modern love - I've essentially turbo-charged my disappointments and disappointing. Perhaps I'm just all charm and no substance.

Startin' to think dating's just an excuse for me to blow coin I ain't got, time I don't have and hope I can't spare.

Actually, hope? That I got.

Cause I keep thinking, this time'll be different.

Music: Its just the power to charm
www.loganlo.com