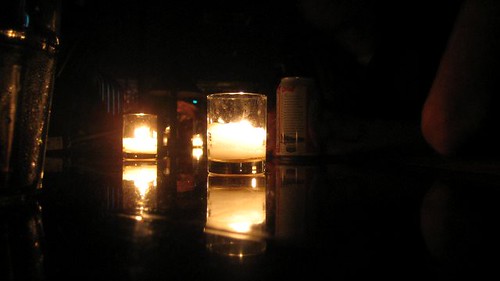 Captredstar had a going away party on Saturday at one of my favorite joints, Solas. Hipstomp, Katsmw, Transistor Girl, Hazel, Paul and some of the Zu Boys were there too.

We ran into others like a Candyfiend - whom I also bumped into last week midtown, an actor from 72nd to Canal, and a Texan and her friend (like the hat?) I met at a party a week ago. Sometimes NYC's a small town.

Lots of memories there. Before my time it was called Café Tabac and Madonna worked there. You know, I met Somena there, was there for dozens of parties, was slapped there (by Somena, thank you), and last saw No 7 there.

I had my 30th birthday party at Solas too.

The coolest thing about Saturday night was that there were at least 10 people there for Kirk's thing that were at my 30th as well.

Have a safe trip, brother.

Pics:
Me, Kirk and Cindy
Gestaltify and Lexxy Pie in meaningful conversation here.

Music: On my way to see my friends who live a couple blocks away
www.loganlo.com