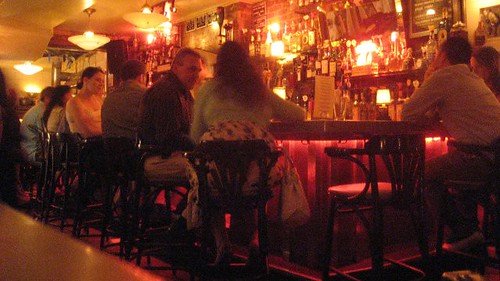 In addition to the Swedish girls, I met a bunch of really attractive lipstick lesbians/bisexuals this past weekend.

Girl 1
Me: Why are you giving me your number?
Her: If you wanna call me, call me, if you don't, f___ off.
Me: OK. Just to be clear, you mostly like the girlies, yeah?
Her: Yeah, and? (pause) Y'know, gimme back my f____ number.
Girl 2
Her: So what's your story?
Me: I'm looking for Ms. Right in the big city.
Her: (laughing) Funny, so am I.
The second girl and I have swapped a few emails; she's in a similar profession. She's very nice - she's also a full-on Jewish lesbian. I'm sure she's a pescatarian from NJ too but I didn't ask.

I seem to get along with girlies that like the girlies. Modern America.

This week, because of the accident, I did some reassessing. I found out that I was deleted by some people.

And I deleted some people - friends, former loves, acquaintances and about two dozen people I'm embarrassed to say that I just don't remember.

Sent an email. Even a text. Telegram, maybe?

Speaking of telegrams, damn that AT&T.