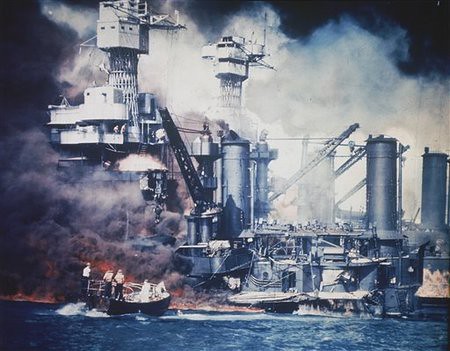 2 Samuel 12:22 tells of when: David had a kid with his buddy's wife, killed said buddy, pissed off God, God took David's son.

Now here's why I like the story: David's a wreck while the kid is sick; David won't eat, won't sleep, etc. But when the kid finally dies, he picks himself up and begins to live his life again.

At times, Life brings you to your knees.

Those phone calls you never want to get:
I've been brought to my knees twice in my life. I'm lucky because it was only twice.

I'm dreading the next time.

I thought about this because I went to a wake yesterday. It was my second third funeral experience; sadly, I'm sure they'll be more.

Today is also the 65th and last official anniversary gathering of the Pearl Harbor veterans. And I've also been keeping up with the story of CNET editor James Kim; he wasn't there when I was there but still...

Despite all the ugliness, we move through life with a balance of hope and acceptance.