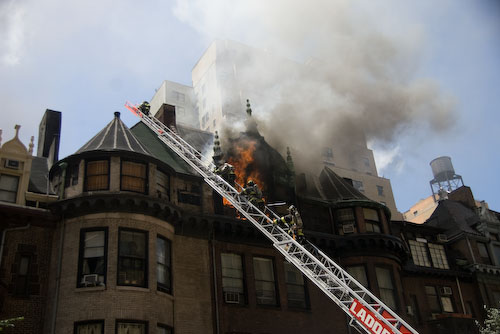 Y'ever wonder why NYC's, NYC? That is to say, how it became the biggest city in the world? Why not Boston, Philly, or DC?

In 1776, this massive fire occurred and pretty much wiped out the city as it was.

Afterward, the city made a decision in 1811 to set up the grid pattern we all know in NYC - doesn't sound like much until you think that most everything past 14th street was forest.

Other places, like Boston, woulda been like, "Well, there's a tree where the road should go, and no one's here anyway, so let's just build a road around the tree." But the plan said t'cut down any tree and fill in any stream in the way of the streets - which most people thought of as insane and wasteful.

But cause they did that, the city grew in an orderly fashion and immigrants - like my folks - that couldn't speak a lick of English could get around the city. So they came here.

Another onea my buddies called me today:

Chris Rock once said that, "There's something about being picked on that makes you work harder to make a reality where no body picks on you."

It's not true for everyone; some people that suffer stay broken. But the ones that get better - oftentimes - get a lot better. Bendy. The broken ones tend to get more broken.

Music: she all fly But I can take the heat
YASYCTAI: Reassess your tragedies and failures. Take the heat and let it burn. (time/2 pts)
www.loganlo.com