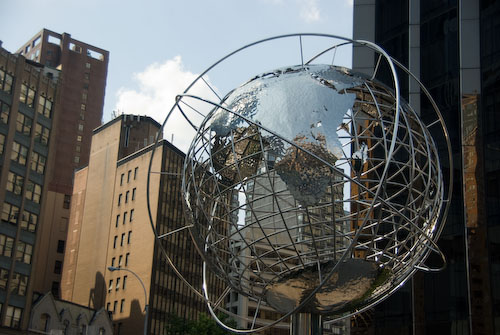 Her: Had lunch with my mom yesterday - and you?
Me: The traditional Chinese Mother's Day dinner of pizza and salad at my sister's place.
Like I said, been watching The Pacific. One episode takes place in Australia.

Last month was the 95th anniversary of the Battlea Gallipoli where the Australians lost like crazy against the Turks. Funny thing's that they celebrate this nasty loss cause it marked the point when they saw themselves as separate from Britain.

My pastor had a sermon once where he noted that childbirth was a thing of dread for women for thousandsa years. Simply put, most women died. Even now, throughout the world, pregnancy is a death sentence for women.

Odd isn't it? How life and death're so related; these time y'think your life's over and it's just the starta something.

Hope you saw you momma and got her a nice pizza or whatever she wanted that day.

Giveth
On the way to see Momma Lo, felt a tap on my shoulder and looked up to see this grey-eyed, British 20-something.
Her: Excuse me, can you help me? I'm looking for someplace to get coffee.
Me: This is Flushing, take your pick. There's the usual Starbucks around the way or anya the Chinese versions of Danish coffee shops along this row. Y'know when the Europeans first entered Hong Kong they brought with them...
Her: (a few minutes later) You're cute. I could use some company while I'm waiting for my friend.
Me: (laughing) I'm flattered, but I'm way too old for you. And I'm taken.
Her: Oh, the non-creepy ones're always married or gay. She's lucky, your girl. (thinking) Is it serious?
Me: Well, I hope so, she's awesome.
Taketh away
Him: Good to see you again, sir. The usual? Short on the sides, longer on top?
Me: Yep.
Him: Crazy weather we're having...wow, you're really thinning, aren't you? Anyway, it's a lot colder than usual, don't you think?
*sigh*

Music: It's not What your parents hoped you'd be
YASYCTAI: Quit while you're ahead. (1 min/0.5 pts)
www.loganlo.com