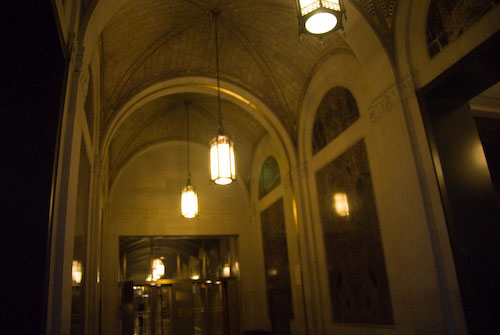 Turning from my last post, once wrote about this mouse in my house. Bugger wouldn't die. Just disappeared one day so figured some poison or cat got him.

Fast forward to last week, when I left my pad decked out in a full suit. Forgot something so I turned around and ended up face-to-face with a mouse. We stared at each other for a second, all high noon-like, 'fore it turned and zipped inna my pad.

Ran after it, dropping my briefcase. It flew into the bathroom so I did the same, slamming the door behind me to trap us both. Grabbing the metal wastebin in there, brought it down on it over and over again, missing each time. Neighbors musta thought I was clear starkers.

Fast buggers, they are.

Finally thought I got it but turns out the dents in the can gave it a second chance; when I lifted it, expecting to find the past-present form of mouse, it sprang away.

So did I, leaping four feet back like a ten-year old girl doing double-dutch. Course, my bathroom's only three feet wide so ended up smashing in my cabinet door.

Deep breath, flipped the can around and slammed it down one last time. Poor bastard, the last thing it ever saw was some crazed Asian-dude in a brown suit bringing down a dented silver metal can on it.

To say that it was a bloody mess's not taking any literary license, lemme tell you.

Dunno how people that kill things regularly, like farmers, do it. Then again, they're probably not wearing a sweat-soaked three-piece using a dustbin. Maybe they are; what do I know?

Her: (noticing the missing can later) What happened to the trash can here? (surprised) And what happened to the cabinet door!?
Me: (sighing) Y'don't wanna know.
Her: (shaking head) I don't want to know.
In other news: my bathroom floor's spotless, I've decided I wouldn't last in the wild; and I still hate AT&T.

Music: Early in the evenin' just about supper time
YASYCTAI: Think about where all the meat y'eat comes from. (2 mins/0.5 pts)
www.loganlo.com