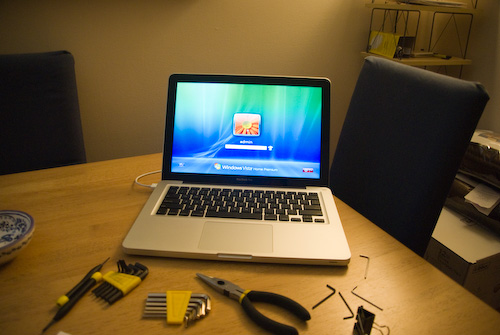 Me: I'm shutting down for the night.
Her: You just said that you're shutting down for the night.
Him: I didn't. (pause) Did I? (sighing) I gotta stop hanging out with computers.
Lately, my financial life's been eat-what-you-kill. The problem's that, after a long period of nuthin, y'grab everything that you can that might lead to scratch, even if most don't ultimately pan out.

'cept divorce. Won't touch divorces. Cause, even though it's not usually the case, one party's got it in their head that, Who the #$@#$ are y'to tell me I'm not good enough?

No, won't do divorces.

Y'wanna turn 10 craptastic apartments that share three bathrooms into four? Get the dude you love into the country legally? Register a trademark and sue someone? Raise $3 million in six weeks? Dual boot Windows on your mac so y'can save your Windows star ratings into iTunes and vice versa?

Yeah, I can do that for you.

Can work cheap, fast, or through - but y'can only pick two outta three.

Music: you wonder why they haven't called when they said they'd call
YASYCTAI: Get back to finishing up that thesis/big project. (weeks/2 pts)
www.loganlo.com