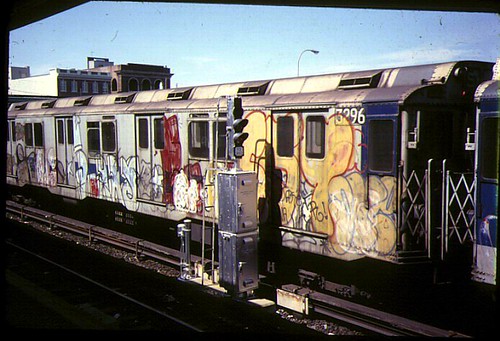 (c) bernard chatreau
Me: That's not how it looks.
Her: How does it look?
Me: At dusk, the 7 train would be packed with Asian teenagers. That's totally fake.
Just saw the remake of Pelham 123 - the last scene shows someone riding the 7 train pretty much by his lonesome. The 7 train, in the early evening, is never that empty. Moreover, even when it is slightly empty, there's always a dozen or so Asian teenagers on board at any given time.

I should know, I was onea them growing up.

1 hour 14 minutes into the film, there was a single shot of an Asian for a second.

Not onea those Asian activists - in fact this may be my only post in three years that even discusses what I am and not who I am - but it does bug me when we're completely figuratively whitewashed outta of a movie.

Then again, it doesn't really matter to me. Cause film's all fantasy anywho. Reality is, we're all up in this joint.

Funny thing is, who's fantasy is it where you see onea us for only a second?

Have you met us? We're lovely.

And when you order food from us, we give you tupperware.

Me: Got a small abscess in my leg like last time and just spent the last 20 minutes digging it out with a knife and toothpicks. Question, do I have to keep hacking at my leg until I see blood?
Him: You may be the dumbest smart person I know.

Word of advice: If you find yourself low on rum, with a painful wound, a large hunting knife, several toothpicks, some gauze and alcohol, it's never rarely a good idea to do self-surgery. A conference with the Professor indicates that perhaps the wrong course of action was chosen.

I'm my own worst enemy, a danger to myself. In other news, I'll be visiting the pharmacy tomorrow. Purpose: Painkillers and antibiotics.

Music: Too late for the young gun This is the year of the knife
YASYCTAI: If you had to, would you know how to take care of a wound? If not, pick up a book. (120 mins/1 pt)
www.loganlo.com