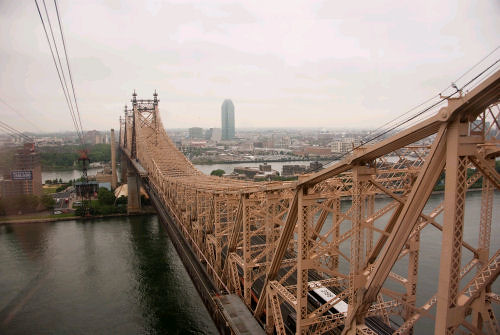 Quadros: Rampage, where do you see yourself in 2 years?,
Rampage: Well, right now I'm 23, so in two years, I see myself, 25.
Bryson met up with me to take some pics for him on the tram. Was cloudy and overcast but I took them anyway.

Afterward, we had lunch at Johnny Rockets. Never been there either. Thought of my grandma; cause y'always think there'll be time enough to do things. Then one day, y'find you've done run outta time.

He's having a kid. His wife, a doctor, agreed to let him teach her how to roll. Should mention that's he onea the best architects in his field and parta the teams in chargea giving the tram a facelift.

Me: Look at us, we're two old, ivy-league educated, white-collar guys. I know why I do it, why do you do it?
Him: It's just like running or something. It's not about beating the other guy, it's about beating yourself. (Fighting in the ring's) different than brawling; to paraphrase Rampage Jackson, if you get into a fight with someone in a club, eventually, someone's gonna have their feelings hurt.
Those three lives I told y'about. We all got them. Realized 90 minutes ago, that I've spent 90% of my life on these two islands, doing two very different things, living two very different lives.

Before his rematch against Chuck Liddell:

Interviewer: Chuck said in his pre-fight interview it's gonna be a first round knockout. What do you have to say about that?
Rampage: If he plans on getting knocked out in the first round that's his business.
Music: Slow down, you move too fast
YASYCTAI: Do that thing that y'always think you've got time for so y'don't. (dunno/1 pt)
www.loganlo.com