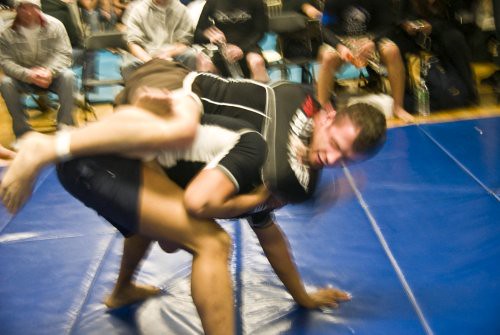 Him: I've got a lotta anxiety.
Me: You know what anxiety is? It's the fear of the hypothetical. And the opposite of fear isn't bravery - it's preparedness.

Buddy of mine recently got his relationship walking papers - he was anxious bout getting dumped and then anxious bout dating again. Get dumped once or twice, it rocks you. Get and give walking papers a dozen times a month, doesn't matter as much. Ask for a number twice a year and there's an anxiety attached to it. Ask for a number four days a week, for a year, and it becomes a whole lotta nuthin.

Well, nuthin and a stack of paper scraps with funny little drawings on them.

You've seen street beef before, right? Two guys all up in each other's grill? Lots of show and puffery. But the guys that truly know how to tangle don't do that. They either walk away or shrug and swing.

The closest I got to street beef recently was maybe five years ago? I said, OK, let's go. Then he flinched. Wimp. So I rolled my eyes and rolled home. Not that I can actually fight, mind you.

This past weekend, was with some of the best submission guys in the city. Yeah, there were some meatheads but these guys were mostly pretty polite. When you got a room fulla well-trained brawlers, you sorta gotta be polite. Saw this one kid just a few pounds heavier than me just demolished a guy that outweighed him by 60 pounds and a foot of height. So impressed.

I've not been sleeping well again. Guess I got my own fear of the hypothetical. Was prepared for slowdowns; up until I got jacked. So I've been sending out the resume and calling up old contacts to prepare all over again.

Man, isn't it always the punch you don't see coming that gets you?

Music: me ready for dem but dem no ready for me
YASYCTAI: You should start preparing for the things you know're coming. (time/1 pt)
www.loganlo.com