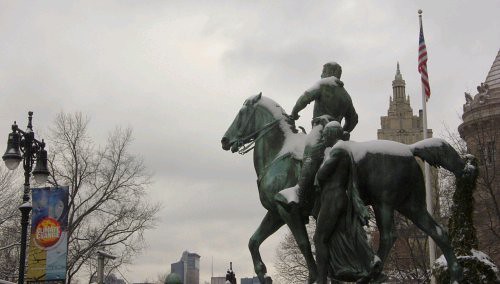 Y'ever see The Warriors? That old school film from the 70s where that freaky dude goes, Warriors, come out and plaaaaay.... It was actually loosely based on onea my favorite historical stories. Lemme tell it to you:

Long time ago, about 10,000 Greeks fought on the wrong side of a Persian Civil war. Mercenaries. The winning side said they'd spare their lives if their leaders got together, which they did (idiots) - course they were slaughtered.

So now, the men are leaderless and hopeless. So they just decided to die. But one mercenary, Xenophon, stepped up and said, Remember who we are. We're warriors. If we're gonna die, we're gonna die like Greek soldiers - on our feet. And our feet'll be pointing home.

So they organized and started the 2,000 mile walk home - that's like walking from Maine to Florida. In sandals. In enemy territory. Madness.

But along the way, they went from sloppy, stupid mercenaries to disciplined Greek soldiers again. Relentless and brutal, they killed anyone in their way. Cause they were gonna get home or die trying. It was all about the trying.

That's why I love history so. Cause it shows us where we should be going.

Y'know, I'm not actually Chinese per se; I'm parta this ethnic group called the Guest People. "Guests" cause we had no home - like the Greeks, we always picked the losing side in a war, far from home. All our stories, all our poems, have something to do with finding home.

Also dunno what 2009's gonna be like. Or what'll happen to me or any of that. It's all just time and tide, yeah? But partly cause I'm clear outta scratch, partly cause I feel my teeth again, partly cause a boy can only drink so much red, red rum, and partly mostly causea Heartgirl/SING, I feel like I'm back on my feet. Or at least they're pointed home.

Spent way too much time the past three years on my knees. Is it: My fear is my only courage or my feet are my only carriage? Either way, it's right.

Hello, 2009 - been waiting for you.
Music: Ive been up and down the highway In all kinds of foreign lands
YASYCTAI: Where do you come from? (120 mins/2 pts)
www.loganlo.com